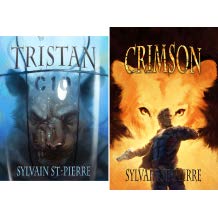 I learned about the power of words fairly early in my life. My parents never swore, unless they were angry. Trust me, when my dad swore absolutely everyone sat up. Then, it was learning to read, and finding out most of the best books at the time were in English. French is my first language, I basically learned English because I wanted to read science fiction. My dad encouraged me, reimbursing me half the cost of a book in English once I demonstrated I’d read it. Anything that could get me to tackle a brand knew language had to be powerful.

I don’t know. I mean I’m self-taught, so I don’t have anyone I was told was this amazing writer that I absolutely had to be like. I also learned by reading a lot of different authors’ books, so I can’t think of one I’d like to sit down with and poke their thought process.

Okay, wow, talk about an actual tough question. Pitting my desire to earn a living from writing, versus my desire to be read. I want to say that I’d be pragmatic and go for the million dollars, but the idea that no one would then read anything I write… I do write for myself first, but I won’t deny that I get some enjoyment out of people contacting me to let me know how much, or how little, then liked my stories. To never have that again…. I don’t know if that would be worth the trade-off. Yeah, I’d have to go with number 2. I have a job I enjoy, which I could do for the rest of my life if I have to. And with all those readers I’m certain I would have great conversations. (And I’d probably try to skirt the rule by seeing if I can make money off the movie rights)

Make writing my life’s work? Hmm, if you mean in the sense of trying to earn a living from it, I’d say five years at the most. Before that I was certain the only way to make money in writing was to be traditionally published, and I know for a fact that with the exception of one of my series, no publisher is ever going to want to touch my books. Five yours ago is when I realized that self-publishing might be a feasible thing. But I’d been writing regularly for years before that. I had a bunch of stories in various stage of completion posted on websites. And while I didn’t have a great following (I am a writer after all) I did have a decent number of comments on most of them.

Without saying the word wr!ter’s bl0ck, what do you use to overcome low levels of motivation?

My writing schedule doesn’t let me get away with having ‘low motivation days’. I’m allowed two 0-word days a month. Granted, that means writing one-word counts, but I find that once I start writing, many words then follow. So I basically muscle my way through those days. Having a routine helps a lot.

How do you select names for your characters?

fantasynamegenerators.com is my go to place for any ‘real’ names. If I need alien names then I just make them up on the fly; type a bunch of random letters, maybe add vowels to balance the surplus of consonants and call it a day. I am trying to cut down on the use of apostrophes.

Do you read your book reviews? How do you deal with bad or good ones?

I have read them, all 4 of them, I’m not popular enough to have people leave worthless comments, so the reviews that have been left are quite accurate, so easy to deal with. I know my own worth as a writer. I know my books aren’t perfect, and I sort of know where they are weak, and at this point the reviews support what I know. Having come from the world of fan sites I’ve already had to deal with plenty of hurtful comments (I’ve been called racist once) or having my work taken apart line by line. Once a reviewer managed to make me stop writing for about a month after an accurate, but scathing comment about my writing process. After that I realized that while he was right, it didn’t invalidate the stories I wrote. And I’ve been building a thicker and thicker skin ever since.