And if thou gaze long into an abyss, the abyss will also gaze into thee—Nietzsche

As Harry Hobnail stood at the edge of the abyss, contemplating his existence, he allowed himself one final moment of whimsy.

“Hello,” he shouted into the void, expecting to hear an echo, but as he leaned over the precipice, turned his head, and positioned his ear into an ideal listening position, he heard nothing.

No one cares about me, he thought. No one ever responds, not even when the laws of physics say they should. What’s the point of this horrible existence?

He steeled himself to jump. He closed his eyes, gathered himself, bent his knees, and—

“Hello,” a voice called back to him from the abyss.

It was not an echo. The voice sounded nothing like his own, and it didn’t repeat the last syllable faintly, over and over again.

“Hello?” Harry responded, quite unsure of himself.

“Hello?” The voice came back from the depths.

“This is ridiculous.” The voice from the abyss sounded annoyed. “Are you an echo or not? Say something else besides, ‘hello.’”

“Are you sure?” The voice asked.

Harry wasn’t. The circumstances of this very conversation instilled doubt into him, and Harry was a doubter by nature. He decided to change tactics.

“Who are you?” Harry asked.

“I’m nobody,” the voice said. “No job, no prospects, no friends, no girl. Basically, I’ve got nothing.”

“Yeah,” the voice replied. “But you’re standing at the edge of an abyss, just like me.”

“You may have a point,” Harry conceded.

“I can’t even do this properly,” the voice said. “I was prepared to jump, alone, into the abyss. But here I am talking to you.”

“From my perspective, you’re down,” the voice said.

“Whatever,” Harry responded. “Either way, things are bad here, too. I don’t have any of the stuff you were talking about either.”

“The universe hates us,” the voice from the deep exclaimed.

“Are you sure?” the voice asked.

“Quite.” Harry added, “I learned about it in science class. No, the reason you and I are in this predicament is a combination of two things: sheer dumb luck and our own dumb decisions.”

“You really believe that?”

“Yes,” Harry replied. “The fact that I’m in this position is mostly my own doing. As you said before, I’m a loser. That’s why I’m here, contemplating my existence over the abyss.”

“Not the loser part,” the voice exclaimed. “That’s your own issue.”

“No, thank you,” said the voice. “Here I am thinking the universe has it out for me, and you come along and tell me it’s all my fault and I have to take responsibility for my actions.”

“No ‘buts’,” the voice interjected. “If there is no all-powerful force that has it out for me, then the only thing I have to overcome is me. I’m not so tough. If I was, I wouldn’t be here now.”

“But what about the luck part,” Harry asked weakly. “I don’t know about you, but my luck’s been pretty bad.”

“Screw luck,” the voice replied. “Luck evens out. Here we are complaining no job, no prospects, no girl, no friends. And at that moment that I’m about to end it, standing over the abyss, luck or the universe or whatever gives me one.”

“Which one?” Harry asked. Like so many situations in his life, he was beginning to feel like he was losing control of the situation.

“You really are an idiot,” the voice replied. “A friend…you.”

“Yes,” confirmed the voice. “No one has taken the time to talk to me about anything real in a long time. It’s always, ‘How you doing?’ I say ‘fine.’ But I’m not. You actually took the time to listen.”

“I think it’s safe to say neither one of us is going to jump now,” the voice said. “Let’s meet back here next week and talk again.”

“Don’t do anything stupid between now and then,” the voice said. “Promise me you’ll be here.”

“I will,” Harry responded. “Farewell.”

“Farewell,” The voice said. “But not goodbye.”

He backed slowly away from the ledge and returned home. Not goodbye, he thought. Not this week, anyway.

First off this story was pure brain candy, no brain ice cream. I wish it could have went on all day just delighting me. This story used preface quotes in a way you rarely see, and punned up the whole title. It was awesome. It was like if some of Asimov’s funny stories had a baby with Terry Pratchet. If the rest of Rubin’s work is like this, there won’t be a witty void left from the passing of Douglas Adams for long. This author has the right stuff.  ~ Young

What struck me most was the intrinsic versus extrinsic view of someone’s problems. Harry is intrinsic, thinking all of his problems are his fault, while the abyss friend is extrinsic, thinking that some universal being is out to get him. When Harry, seemingly of a different world, tells him that there is no being, this frees his new friend. Harry, though still feels like he is a failure, when suddenly he has a friend, and that alone means he is not a failure. The use of the inter-dimensional abyss is clever, much cleverer than Harry, who still seems quite aloof. There is just enough character development in this to shake your head at poor Harry.  Well done, succinct, and well played. ~ Hawk

We want to thank Ari Rubin for being our first #HYflash participant! You are going to do great things and wear many great hats! 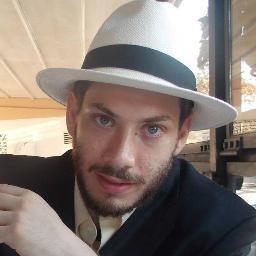